There has been a lot of interest in the use of infrared technology as a monitoring method for detecting marine mammals, especially during the hours of darkness. In time this method may be included in regulatory requirements. Thermal Imaging is a technique that has been used in marine mammal research and gives us an insight into its capabilities and limitations.

What is Infrared (IR) Technology?

Infrared (IR) technology is capable of detecting thermal emissions at the infrared end of the electromagnetic spectrum. IR detection utilises the difference between the temperature of the animal's skin or breath, and the surrounding water and air.

Infrared light falls into two basic ranges: long-wave and medium-wave. Long-wave infrared (LWIR) cameras, sometimes called "far infrared", operate at 8-12μm, and can see heat sources a few miles away.  However longer-distance viewing is made more difficult with LWIR because the infrared light is absorbed, scattered, and refracted by air and by water vapour.  Medium-wave (MWIR) cameras operate in the 3-5μm range.  These can see almost as well, since those frequencies are less affected by water-vapour absorption, but generally require a more expensive sensor array, along with cryogenic cooling.

The effective range of an infrared camera depends on the camera’s resolution, field of view and the size of the desired object.  Many camera systems use digital image processing to improve the image quality.  Some companies offer advanced "fusion" technologies that blend a visible-spectrum image with an infrared-spectrum image to produce better results than a single-spectrum image alone.

Can we use Infrared (IR) Technology for Detecting Marine Mammals?

IR technology depends upon a temperature difference between an animal and its surrounding environment.

This can be a challenge as marine mammals typically have extremely effective insulation.  However there are areas on their bodies where insulation is less extreme, for example flukes, blowholes and fins can show up clearly.  Studies have found that the cetacean's blow is clearest on IR images.

In addition the cetacean's 'footprint' i.e. where the water surface temperature has been disturbed, can be clearly displayed by aerial IR surveys (Churnside et. al., 2009).  For these reasons there has been some enthusiasm for applying IR technology in marine mammal mitigation measures and also in the mitigation of ship collisions. 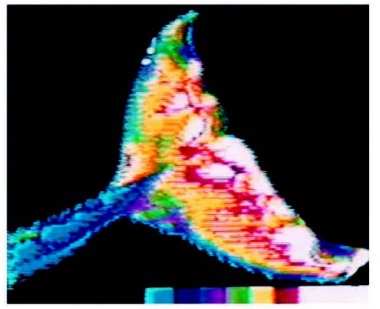 IR thermograph of the fluke of a bottlenose dolphin. Warmer areas are shown in white and red, cooler areas in blue.  (Taken from Baldacci et al. 2005)

IR detection is not to be confused with night vision technology.  Night vision devices utilise image intensifying technology. They operate in near darkness by amplifying visible or near visible ultraviolet external radiation (0.4-1.0μm) from the moon or starlight and cannot operate in total darkness.  They have also limited ability in fog, haze etc.  This has limited the development of night-vision as a marine mammal mitigation tool.

IR systems are limited by both biotic and abiotic factors.

As temperature differences are essential for IR detection, marine mammals’ highly effective insulation may affect the scope for IR detection.  This may be of particular importance if considering such technology for detection of species that live in extremely cold conditions, for example the bowhead whale, which will have highly insulated bodies.  As mentioned above, IR radiation detection is often of the areas of an animal’s body where insulation is less such as flukes, fins, blowhole and the blow itself.  Thermographic detections are thus dependent on the surfacing and diving behaviour of marine animals in the same manor that diving behaviour effects visual observations.  Therefore the availability of a species must be accounted for when considering the detection rates acquired through IR systems.

Even though animals come to the surface they can still be covered by a layer of water. Since water is opaque to IR radiation and a layer of just a few microns is enough to completely attenuate it, this can result in masking the temperature of the body.  Studies by Cuyler et al. (1992) of baleen whales in northern seas showed that the thermal radiation of surfacing minke whales was completely masked because their bodies were covered in a film of water.  Detection performance based on body temperature was extremely limited (ranges only up to 150m in good weather conditions).  Those whales with large blows such as the blue whale could be detected at further distances of up to 1km.

Abiotic or environmental factors can also dramatically affect the performance of IR systems, such as fog, precipitation, high humidity, clouds, sea state, glare and ice presence.  Solar reflection off the sea can cause reflected “clutter” for the system which increases when the sea surface is rough, with each wave scattering the light.  Breaking waves or presence of white caps due to strong wind cause problems in this manner.  Sea clutter can also be a problem at night even without the scattering of light as wave action can result in areas with different apparent temperatures which in turn can lead to false triggers.  This is called emitted clutter.  This can be further exaggerated if the platform used is near to the sea surface, therefore observation angle is another factor which affects the efficiency of IR systems.

The use of IR systems in field conditions is reviewed in a 2020 study (Smith et al. 2020) based in the Atlantic off the coast of Canada.  The study reported that in combination with other methods of detection (MMO/PAM), IR systems should increase detections rates.  The study also details notable limitations of such systems including high levels of ‘false positive’ IR detections caused by triggers from avian stimuli, and also the inability to provide identification of cetaceans to species level with a high degree of confidence.

Forward Looking Infrared (FLIR) Cameras – this is a system where thermal imaging sensors are fitted to forward looking infrared cameras.  These sensors detect infrared radiation to create a "picture" assembled for video output.  There are many different types of FLIR cameras and as the name suggests each one has a restricted horizontal field of view (HFOV).

This type of device is used extensively in civilian and military applications for example for aviation and driving in darkness or foggy conditions, search and rescue, etc.  FLIR cameras have also been used by marine mammal researchers to detect marine mammals.

This study’s aim was to compare the effectiveness of observations in the infrared spectrum compared to observations in the visible spectrum (i.e. normal visual observation).  Three cameras (FLIR Thermovision A40M) were used mounted at 13 metres above sea level.  The overall field of view was 37º and  incidence angle of 72º.  This study reported that infrared technology was successful at detecting killer whales’ bodies, fins and blows during both day and night at ranges from 43 to 162 metres.  Whales that were at distances greater than 100m were detected primarily by blow only.  This study reports that infrared observations are predicted to provide a 74% increase in hours of possible detection compared with visual observations when used in good conditions (clear skies, calm seas and wind speeds lower than 4 m/s).  When appreciating this value careful consideration of species (i.e. killer whale fins are very large and thus create an easier target for infrared than other species) and ambient conditions is needed before assuming that this would apply for other species and weather conditions.

This study’s aim was to compare the effectiveness of observations in the infrared spectrum compared to observations in the visible spectrum (i.e. normal visual observation).  The camera used was a SAGEM MATIS Handheld thermal imager and was mounted on a tripod 14 metres above sea level with a horizontal field of view of 9º and an incidence angle of 6º.

This study reported how performance of the IR system was strongly affected by weather conditions and sea state such that it was practically useless in rain, fog or haze, high humidity and increasing sea states.  In better weather conditions with low humidity the system was capable of detecting sperm and fin whale blows, changes in the emissivity of water left after animals surfaced and in some case the emissivity of skin of sperm whales due to their movement.  They also reported that restricted field of views are a problem and that for marine mammal monitoring greater fields of views would be needed. 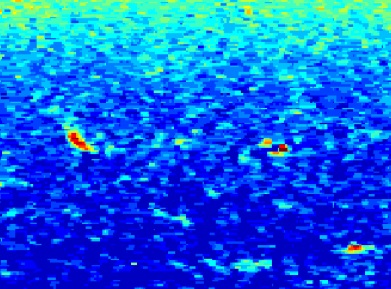 System: The Night Navigator 3 was developed by Currentcorp in Canada.  It has been used by the Centre for Whale Research in Australia where it is used to study humpback whales on their breeding grounds but was primarily designed for collision avoidance with whales.  It is a device which incorporates 3 detection systems in one (normal visual, night vision and infrared cameras).  The infrared camera has a maximum field of view of 20 º with an incidence angle of 6.8º, though a cryogenically cooled version with a 25º field of view is also available.  It can be rotated on its axis to give a 360º monitoring platform.  They have an automatic whale detection system, though this is not recommended for use without an observer.

Trials: Night Navigator has been used to detect whales up to 2km from the vessel, at night, in sea states up to Beaufort 4 and with swells of up to 2m.  Dolphins were detected in large pods up to 1km away and individual dolphins at up to 500m from the vessel.  The equipment has also used in Australia to detect turtles, although detection of turtles is likely to be highly dependent on them being active (creating heat from muscle activity) and at the surface.  The Centre for Whale Research ran night-time transects while scanning 30 degrees either side of the bow and changing observer every 30 minutes.

System: The Alfred Wegener Institute (AWI) utilises the First Navy infrared system in combination with a custom data acquisition and processing software to automatically detect whales using a 360 degree monitoring system.  Images are taken and analysed, with the sensor rotating through 360 degrees five times per second with a vertical resolution of 18º.  The detection system was placed 28.5m above sea level during trials.

Trials: The AWI system has been tested for minke, humpback and fin whales and has been reviewed by Zitterbart et al. (2013).  The trials were conducted during research cruises to the Arctic and Southern Oceans totalling 270 days.  The technology detected 82-92% of the blows detected by visual observers, at ranges up to 5km (Zitterbart et al., 2013).  In some circumstances the IR technology was able to outperform observers with only 63% of events detected by the IR system being detected by observers.  However, further investigations of the detection biases are required.  The AWI system has been extensively trialled in polar regions where the thermal contrast between a surfacing animal and the water is greatest, but has also been successfully used to detect whale blows in water temperatures up to 23º C.

System: An IR system has been developed by Seiche Measurements in the UK.  It uses infrared video cameras with a field of view of ~15º and the cameras are panned back and forth to cover the desired search area.  Lenses can be changed as required to alter both the degree of magnification and the field of view.  Coverage of 360 degrees can be achieved by mounting a number of cameras on the vessel and using them to scan separate sectors around the ship's perimeter.

Trials: This system has been trialled on a seismic vessel in South Africa and from a small vessel off the Azores.  According to Seiche (R. Wyatt, pers. comm.) it performed well from the small vessel in swells of up to approximately 2m and in water temperatures of 17.5º C.  Captured images included a range of species (sperm whale, Risso's dolphin, pilot whale).  The Seiche system comes with image stabilisation, dehazing and distance estimation software. 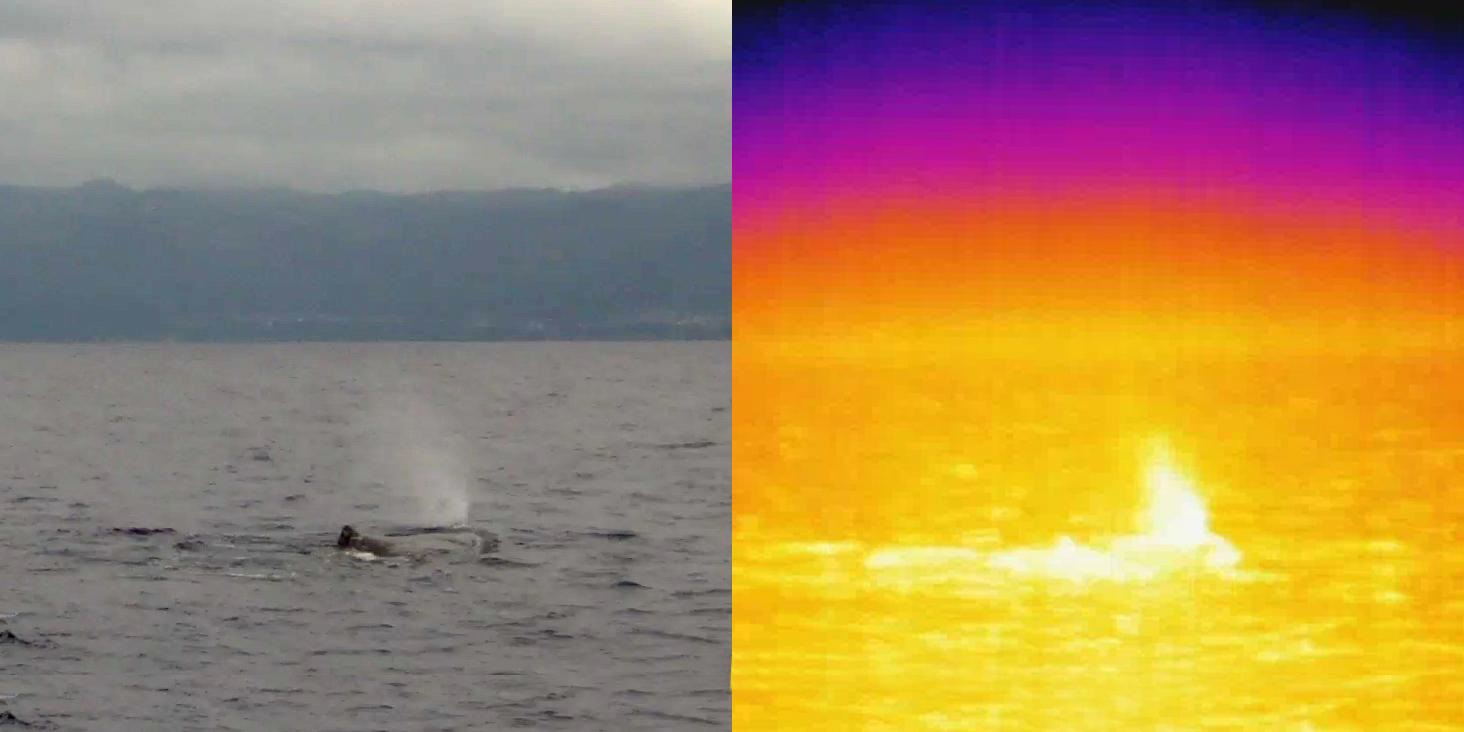